“Wait, he’s from D.C.?  As in Washington D.C.?” I whispered to my husband. We were having breakfast in the small café in the Anselmo Buenos Aires hotel, overhearing a conversation between an American woman, her daughter and the hotel chef at the other end of the room (of course we were staying there for free using Hilton points). I leaned in closer, hoping to catch more details. How did an American chef end up in this small boutique hotel nestled in the heart of Argentina’s capital city?

I had been watching him ever since he walked in – intending to compliment him on the incredible meal we had eaten in the hotel’s wine bar the night before. We had heard there was a new chef so we decided to skip hunting for a restaurant in the rain and eat in.  We had been absolutely smitten with the creative menu and culinary artistry. The food presentation and flavors were incredible.

Our appetizer, warm Brie cheese encrusted in polenta and served with honey and lavender drizzled on top, was a delectable foreshadowing of what was to follow. My filet mignon was to die for, cooked to absolute perfection and served with roasted brussel sprouts and a delicious pumpkin puree. My husband tried a goat cheese and arugula pizza with squash sauce and tomato comfit, and was completely blown away.

In fact we loved our meal so much that we ate at the wine bar three times during a weeklong trip, something we never do when traveling. Everything we ate there was high-level cuisine with complex, perfectly combined flavors. Other dishes we sampled included a succulent warm braised endive salad with blue cheese and candied hazelnuts, and an unusual and divine banana tahini soup. Meals at this small, literally unknown hotel wine bar rivaled top dining experiences in Paris, New York and London –  and that’s not an exaggeration.

I had imagined the chef to be Argentinian, or perhaps European, so I was not prepared to hear an American accent. I also couldn’t believe the story that I was catching in snippets from across the room. Apparently he and his wife had driven from D.C. all the way to El Salvador, and then later to Argentina. I had to find out more. I introduced myself, and learned his name was Dave Soady. After complimenting him, I told him how intrigued I was – especially having a strong case of wanderlust myself.  He agreed to talk to me and share his amazing travel story.

It had all started about 9 years ago. That’s when Soady and his wife Cris, whom he’d met two years earlier, began dreaming of living abroad. He was from the DC area and hadn’t lived anywhere else. She was born in El Salvador but her family had migrated to the United States when she was four years old. They both shared a desire to leave the U.S. and experience something completely different. Soady was also ready for a new career. In his younger years he had been a talented hockey player, but injuries had ended that particular trajectory.

He initially thought he’d go into business and started working for a construction distribution firm where he met Cris. But his positive experience cooking in a local restaurant after high school kept haunting him, and he was getting tired of his desk job. In 2009 he decided to enroll in L’Academie de Cuisine, a culinary school in Maryland. After graduating in 2010, he landed a job as a sous chef at Rustico, a restaurant in Alexandria, VA. That’s where he learned to “never say no to a customer” and to “always push yourself as far as you can,” Soady explained.

With his blossoming new skills, he and his wife felt inspired to pursue their dream. They would move to El Salvador and open a restaurant of their own. “My wife can organize just about anything,” said Soady of Cris, who had worked in management for many years. Her family had a house in El Salvador, so it seemed like a good place to begin their adventure.

In June 2014, they packed their car full of all of their belongings, including his special set of chef knives and their two beloved dogs, and headed out. They drove all the way to El Salvador, which took two weeks. They spent six months there with family, making friends and connections and looking into buying land. Although Soady ended up running a restaurant in El Salvador and consulting for another restaurant, they couldn’t get their own project off the ground. “Now I’m glad it didn’t work out, for a multitude of reasons,” he said.

They decided to set their sights on a new destination – Argentina. “We had been there before and it was high on our list of favorite places,” Soady explained. He got on Craigslist and searched for “Chef Argentina.”  The first thing that came up was a position on Estancia La Margarita, a remote tourist ranch in the Arentine countryside 300 kilometers south of Buenos Aires. “It sounded like the adventure we had been wanting for a long time,” Soady said. He applied via email and was invited to fly down for a four day interview that included cooking for the owner and guests. He got the job.

Once again they packed their car and their dogs and headed south. They left December 19, 2014, crossed into South America on New Years Eve, and arrived at the ranch January 21, 2015. “We averaged about 600-700 kilometers a day. Our biggest travel day was over 900 kilometers in Northern Chile. On a winding road in the Andes we’d maybe do 500 kilometers a day.” If they counted their earlier travels from the U.S. to El Salvador, their journey through the Americas had taken them across 12 borders. “Our favorite country was easily Columbia,” said Soady when pressed to choose. “It was clean, gorgeous and fun – the people were incredibly friendly.”

When they got to the ranch it was like going back in time. “There were no heaters, just fireplaces and pot belly stoves, and the water came from a well” said Soady. “It really couldn’t have been a more rustic setting.”  He found himself the head of a kitchen that was far from commercial. He cooked on a large, wood-fired cast iron oven. He only had one work surface, a giant marble table. But it was a chef’s dream.

All of the ingredients he worked with were fresh, local and organic. “We had 40 cows, 15 horses, chickens, fruits, nuts and vegetables all from the property,” he said. At one point he butchered a cow by himself.  He started creating signature dishes and soon word spread about the innovative farm-to-table cuisine being offered on the ranch. “People told me that this kind of cuisine never happened on an estancia. We kept getting repeat customers who would drive 3.5 hours to eat at our restaurant,” he explained. “We were getting good reviews on Trip Advisor and excellent feedback from the guests.” One highlight was a 10 course tasting he did for Thanksgiving.

Cris was hired as the general manager and helped run the ranch. She took care of bookings, supervising staff, picking up guests at the bus terminal, giving the ranch animals shots, and taking guests on horse rides. All went well for about a year and half, but in February 2016, the estancia was sold and the new owners weren’t a good match for Soady and his wife. They’d had their eye on Buenos Aires for some time; especially after all of the rave reviews for his cooking.

By June they had decided to take the plunge, leave the estancia and move to the capital city. “We got to Buenos Aires with no jobs, no place to live,” Soady said.  “In the U.S. when you are looking for work, you go online. Here you beat the pavement, the Internet doesn’t help you at all.”  He took to the street immediately, even before they had finalized a place to live.  On his second day he came across the Anselmo, which happened to be in need of a new chef. He had an interview on the spot and got the job. He quickly revised the entire menu and was already getting attention for his cooking only one month later, when we met him in July.

What about their future plans? “When you travel as much as we have in the last couple of years, it becomes an addiction – you keep wanting to see what’s around the next corner,” explains Soady. “We are happy to be in Argentina and plan to be here for a least the next couple of years, but we would also like to go to Columbia. And Cris has never been to Europe so I want to take her there.  But there’s so much to see in South America. We love Buenos Aires and how people are always out doing things day and night. They really believe in enjoying life and not committing the sin of the rat race, that’s what I really appreciate.”

Both Soady and his wife have created a rich social life in Buenos Aires. He coaches hockey and she is active in the local arts community thanks to her other great passion and skill – Flamenco dance. She also recently created BuenosArtists.com, a website that offers a  “non-tourist approach to the entertainment scene in Buenos Aires” – a way for visitors to tap into local events that they might not find out about otherwise.

Did he have advice for those of us who want to travel extensively, or even live abroad for an extended period of time? Just go for it, 100 percent. “To me, the whole point of traveling is to live someone else’s life for a while.  If you travel with reservations and fears in the back of your mind, you aren’t really doing that.” Soady said.

He is glad that he and his wife took the risk. “Travel has made me a much friendlier person and more peaceful.  I used to be standoffish and talked down to people a lot. The thing about Latin American is that if you take interest in people, they take interest in you. One time we were talking to someone on the street about our dogs and they eventually invited us into their home,” he said.

Travel also has changed their perspective. “This whole trip has been so humbling. El Salvador for example is an impoverished country with a lot of problems. I went from the elitist society of D.C. to this place where we had running water two days a week. There are ups and downs – but it’s worth it.  During the downs you figure out a way to get by and you do. It changes you.” 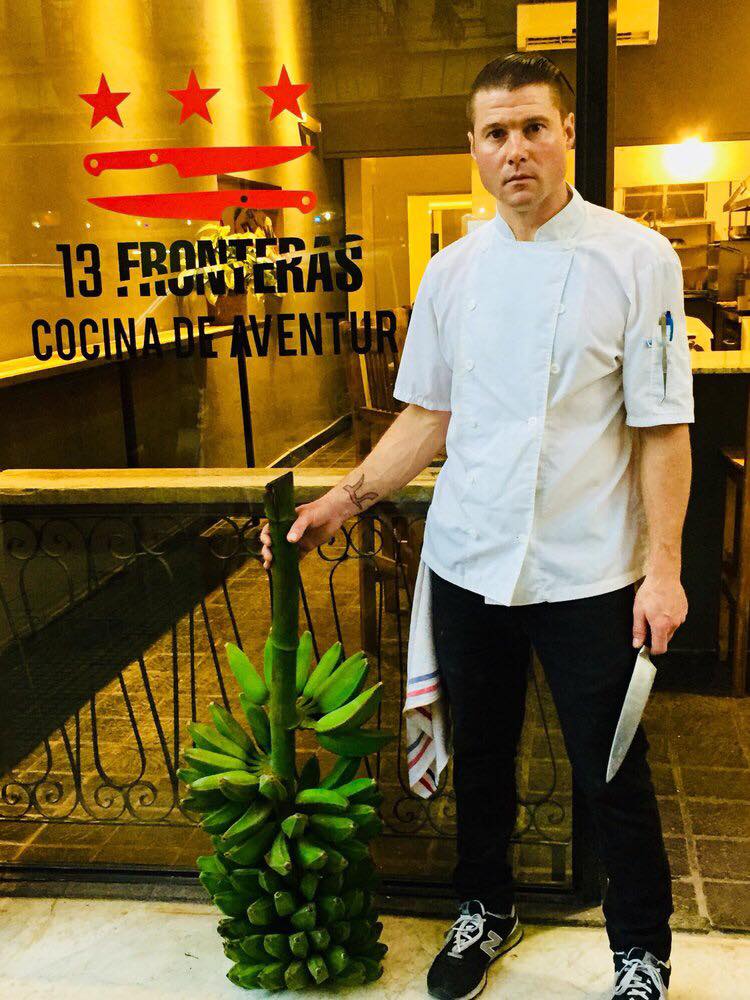 UPDATE:  Since I first wrote this blog post, things have changed.  Dave has opened his own restaurant in Buenos Aires: 13 Fronteras. Looking at Trip Advisor reviews, it’s already been a BIG hit.  I’m not surprised.  So if you find yourself in Buenos Aires – stop by 13 Fronteras, sample Dave’s delicious cuisine and hear more incredible travel stories.  You’ll be glad you did, and you might leave as inspired as I was.   And check out the podcast episode where I interview his wife, Cristabel Soady.

(Food photography by Will Austin)

Lisette Austin, aka Jet Set Lisette, is a travel podcaster and award travel expert. She has been teaching workshops on earning miles and points since 2013 and created the online course Jet Set 101: Becoming a Travel Hacker. She has saved over 110K in travel costs, and always has over a million miles and points at her disposal. She is currently working on a new podcast project about DNA travel.
Prev

This site uses Akismet to reduce spam. Learn how your comment data is processed.

LEARN HOW TO EARN MILES